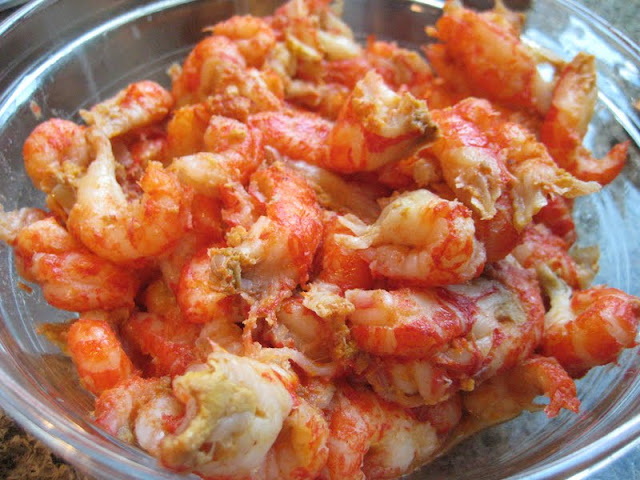 Recently I was visiting at my older sisters home in Seattle, Washington.  My mom also happened to be visiting my sister too, so it was a quick little family reunion of sorts for us.  My sister is able to purchase locally raised crawfish in Seattle at her local WholeFoods, (which by the way does not purchase Louisiana crawfish as it does not meet their high standards....really?.....really!....really.) So we decided to have crawfish etouffee one evening.  There is debate within our family as to which way to cook etouffee is better.  One version uses a butter based sauce (featured in an earlier shrimp etouffee post,) while the other uses a can of cream of celery or cream of mushroom soup.  (There are other ways too using a roux as a sauce base, but the two most popular versions in our family are the butter or soup based sauce.)  To be honest I had never tried the version that used more of a cream sauce base so really I couldn't say if I liked it or not, but I had strong feelings I would not like it.  So thus, the Crawfish Battle Royale began.  We had enough crawfish to make both versions so we proceeded to do so.  Really both start off in a similar fashion, and have mostly the same ingredients rather one uses butter while the other uses a can of cream soup.  So at the end of the meal it was rather a draw then one clear winner, but because etouffee is really a special meal for me, I would rather stick with the butter based sauce.